DC MOTOR, HOW IT WORKS?

A Direct Current (DC) motor is a motor that turns energy from a direct current and turns this into mechanical energy. The first DC motor was developed around the 1830’s-1840s. They were commercially unsuccessful, because these motors were battry powered and batteries were still very expensive and the quality was low. When the electrical grid was created and the rechargeable batteries were invented in the late 1800s this all changed. The first commercially viable DC motors entered the market. Some examples of applications in which they are still used are:

DC motors have been improved continiously, but other types of motors, like the BLDC motor, have been developed in the mean time too.  As a result, the use of brushed Direct Current  motors in several applications is limeted today.

HOW A DC MOTOR ACTUALLY WORKS

The rotor is normally located on the inside of the motor, while the stator is located on the outside.  The rotor contains coil windings that are powered by the DC current and the stator contains either permanent magnets or electromagnetic windings.  When the motor is powered by DC current, a magnetic field is created within the stator, attracting and repelling the magnets on the rotor. This causes the rotor to start rotating. 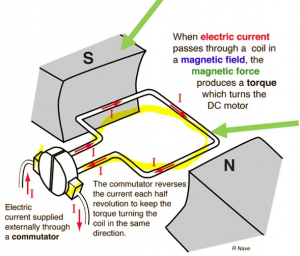 There are four types of DC motors. All four types work in roughly the same way, as a Direct Current motor always consists of two main parts: a rotor and a stator.

When it comes to starting and regulating speed, brushed DC motors have a good performance. The torque density is relatively high for these motors. A Direct Current motor runs smoothly and the range of speed regulation is wide. The overload capability is strong and the electromagnetic interference is small. A disadvantage of the DC motor is the structure. There is a sliding contact between the commutator and the brush. This causes sparks and mechanical wear. Direct Current motors have relatively short life expectancy because of this and the motor has high maintenance cost. It also raises reliability concerns.

investment in high-tech enterprise in China, with green around the world, science and technology to create the future for the vision, global services as the goal, to improve people‘s living environment and improve industrial automation efficiency and provide innovative solutions.